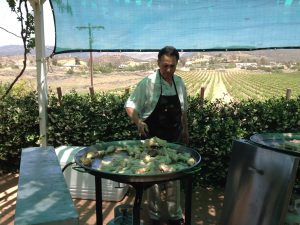 We will be featuring our 2015 Amber Chardonnay and 2011 Les Deux Rois.   Our Renaissance by Reyes Winery 2011 Les Deux Rois has won many awards including a gold medal & 90 points from the 2014 San Diego County Fair Commercial Wine Competition, plus 2nd Prize for best label in the 2014 San Diego County Fair Commercial Wine Competition. In addition, it has received a bronze Medal in the 2014 O.C. Fair Commercial Wine Competition. This is a blend of California Cabernet Sauvignon and Merlot. The label depicts our family crest, which represents an extensive ancestral history. It has a rich ruby red color with aromas of plum, dark cherries and a hint of cocoa. On the palate you get a continuity of its delectable aromas. This wine can be paired with so many dishes. Enjoy with Beef Bourguignon, 3-month Manchego cheese or berry bread pudding. 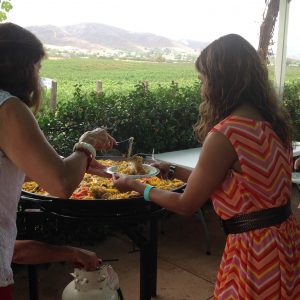 Come and enjoy Robert’s Paella at Reyes Winery this Saturday from 2-5pm. It is $49 per person and includes 2 glasses of wine, paella, salad and dessert.