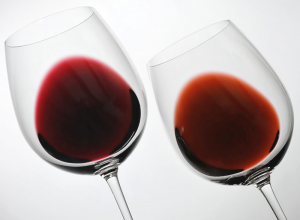 Oxidation in wine is the most common wine fault. It is presence of oxygen and a catalyst is what makes the process to transpire. Oxidation can happen during different stages of winemaking through aging in a bottle. It can cause a loss of color, for instance the red wine will have a brownish tint. It reminds me of the color of a raisin. Sulfates are added to wine, to prevent this.

The Romans used sulfur dioxide in winemaking, they had discovered that burning candles inside empty wine containers kept them fresh and clean from vinegar.  Sulfites are even there in unsulfured wine. It will just contain a smaller amount, like 10mg per Liter. It is used like an antioxidant which protects from spoilage, either from oxidation or bacteria that causes browning of the wine and it loses its flavor. Adding sulfates also controls and minimizes the “volatile acidity”, which is another word for vinegar.

Sulfur dioxide is also extremely significant compound in winery sanitation.  All equipment must be kept clean. Bleach can cause cork taint, which was explained in the last article. In order to disinfect any equipment, a solution of water and citric acid is created by adding to sulfur dioxide.

Sometimes oxidation will start to occur in the bottle before you uncork it; when you do open the bottle and notice that either your white or red wine seems a bit brown, smell it. White wine tends to have a nutty aroma while red wine will smell like vinegar. I was reading an article recently and it also stated that red wine can smell like warm stewed vegetables.

A small percentage of people have allergies to sulfur dioxide, so many wineries are trying to lower the amount used. The legal amount is 350 ppm (parts per million). We currently use 50ppm. When wine has over 200 ppm, the smell or the odor is more predominant. Wines that travel from Australia or New Zealand tend to have a higher amount because they need their wine to survive the trip.