On St. Patrick’s Day, Everyone is a ‘Little Bit Irish’

Have you ever had an Irish wine? Many people are familiar with Irish whisky, beer and even Irish liqueurs. Who doesn’t love Irish crème liqueur and coffee? However, the Irish do make wine, too!

They grow varietals like Cabernet Sauvignon, Merlot, Sauvignon Blanc, Gewürztraminer, and many others. They also produce apple and pear hard cider, and even mead (honey wine). The European Commission has now officially listed Ireland as a wine producing country. We know from history that in the 5th century, the monks planted a vineyard at the Cistercian monastery in County Kilkenny. In 1300 an Irish Dominican friar, Father Geoffrey, who spoke many languages, wrote about viticulture and fermentation. As time passed, fewer monks were needed for the production of wine because many wine-educated Irish started to commercialize the industry. Today we have many winemakers in America and other parts of the world which had ancestors who made wine in Ireland.

Did you know that the traditional St. Patrick’s Day dinner of corned beef and cabbage started in the early 1900’s in New York? This dish was originally made with bacon and cream. Many Irish in the United States realized that corned beef was a less expensive choice than using the traditional bacon. In Ireland, pork was very economical, but in America it was pricey. Americans ate beef which was very affordable. The Irish middle class frequented many Jewish delis and markets where they would enjoy eating corned beef. Corned beef and cabbage became so popular it was served at President Lincoln’s inauguration dinner in 1862.

My grandmother always made casseroles for dinner in her CorningWare or Pyrex dishes, which I still have. Casseroles are comfort food and remind us of good memories. She would tell me stories of my grandfather’s stepfather George, whom was Irish. Every year my grandmother would make corned beef and she would wear a silver leprechaun pendant for St. Patrick’s Day. Even though we weren’t Catholic, she would celebrate this holiday for George’s memory because he was Irish. And isn’t everyone a “little bit Irish” on St. Patrick’s Day? 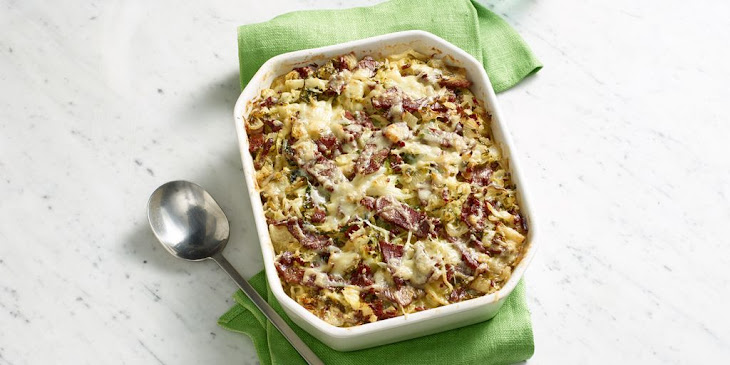