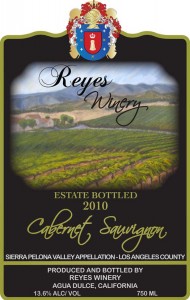 About 20 years ago, I remember being in the tasting room of Wente Winery during my internship and the tasting room manager was doing a wine pairing with me. He made beef jerky and paired it with their Cabernet Sauvignon. He also showed me a brownie mix they sold, that you add eggs, oil and Cabernet Sauvignon. I was sold! I have adapted this concept and made my own brownie recipe. Reyes Winery 2010 Cabernet Sauvignon has a sweet aroma gives this fruity wine its huge popularity.  Raspberries, Cocoa and Blackberries are constituents of its amazing aroma. Flavors of black cherry offer a delightful lengthy finish.  This was from our second bottling from our Sierra Pelona Valley Appellation. A top seller since bottling, this wine is smooth and delightful till the last drop. This Cabernet Sauvignon has won a silver medal in the 2012 LA International Wine & Spirits Competition and 3 bronze medals; 2012 O.C. Fair, 2013 LA International Wine & Spirits Competition,  and the 2013 San Diego County Fair Commercial Wine Competition. Plus was awarded 82 points in the Wine Enthusiasts Magazine in the March 2018 edition.

On August 30th is International Cabernet Day! This week, on July 22nd, I am hosting the 6th Annual Zonta SCV Summer Social at the vineyard. I will be serving picnic dinner and those brownies that inspired me. Come and support Zonta of the SCV this week. Purchase tickets at https://www.scvzonta.org/events/

Come and enjoy this 2010 Cabernet Sauvignon in the tasting room this month and next. It’s selling fast; get it before it sells out. August 25th, I will be hosting a Cabernet Vertical. I will be sampling Cabernet’s from 2009-2015 plus something special. Sign up today at https://squareup.com/store/reyes-winery/

Cabernet Sauvignon can be paired with a peppercorn crusted Parmesan, Abbot’s Gold cheese, or even a horseradish Havarti. Filet Mignon topped with blue cheese would be a great dinner with a bottle of this award winning wine.  Then for dessert, chocolate cream pie! Three years ago, at a press conference, I made individual chocolate Cabernet cream pies topped with a blackberry. This is a recipe for the chocolate pudding filling. 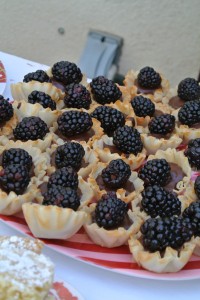