Coming February 2nd, I am doing the first “Red Blend Tasting Event”. I have done many wine pairing events, but not a blend event. I have chosen specific Reyes Winery Blends for this educational yet fun food and wine pairing. Every wine has a story, and I love sharing each one of them with you. Its $15 per person and it includes a Reyes Winery 12oz glass to take home. Please make your reservations in our tasting room or online at https://squareup.com/store/reyes-winery/. 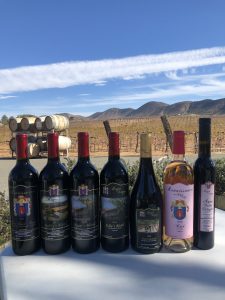 I will be featuring the following wines; 2011 Les Deux Rois, 2011 Robby’s Blend, 2013 Ryan’s Blend, 2014 Julia’s Blend, 2015 Oso’s Blend, 2016 Renaissance by Reyes Rose and the 2013 Agua Dulce Delight. Most of our blends are named after Robert’s grandkids and Oso is named after our beloved German Shepherd who passed away last year. This is a limited edition “member only” wine that is a blend of Merlot from our vineyard and Tempranillo from the Alonso Family Vineyards; which is Le Chene’s vineyard.  It’s been aged in “French Oak” for 18 months. This wine is fruity with notes of plum, pepper and anise. Only 113 cases were produced.  This wine has received 87 points from the Wine Enthusiast Magazine (05/2018 Edition).

When I pair food with wines, I first smell the wine and see what beautiful aromas it has. This wine is dry but very fruity. The notes of the anise make me want to pair this with a milk chocolate versus a dark. When the wine is dryer you pair the opposite and go with a higher fat content chocolate.  A few weeks back at an event, I made an anise cheesecake with a chocolate crust and a chocolate drizzle on top. This would be perfect. Of course, I started with dessert. For a delightful pairing for dinner, I would choose a plum chicken. I have made this recipe many times with the 2011 Robby’s Blend. The difference that I would do with Oso versus Robby, is add fresh fennel in the pan when roasting the chicken.

This is a healthier version of plum chicken. Most of the time, the chicken is fried. Every fall when Italian plums are in season, I love to prepare the sauce for this dish. This is one of my favorite dishes to serve for brunch, since it’s light and healthy. Serve with rice and enjoy!