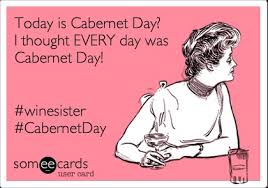 This past weekend, I opened a 2014 Cabernet Sauvignon to see how it is developing. 2014, was a tough year for our grapes. We didn’t have a lot of water, which made the wine a bit astringent. If you follow me, you are aware that we have a Cabernet Vertical coming next week. I had someone ask me what type of petite bites I serve. Well, depending upon the wine and what is in season, from cheese to dessert and anything in-between.   Last year, the 2014 was paired with a dark chocolate covered cherry.  Then the 2015 Cabernet Sauvignon, another favorite of mine was complemented with a chocolate almond cupcake with blackberry creamed honey drizzle and a cinnamon cream cheese frosting with a blackberry chocolate decoration. That was definitely a hit!

When pairing the 2014 Cabernet Sauvignon or any other wine, I look first taste the wine and see what notes there are. This dark and rich, estate grown Cabernet Sauvignon has bold tannins with aromas of black cherry, plum and freshly cracked black peppercorn. On the palate this wine has intense flavors of currants and pomegranates followed by a woody spice.

I would enjoy this with spaghetti Bolognese, Vella dry jack cheese or chocolate cherry cheesecake. Hmmm…what will I present, you will have to come join me and see.